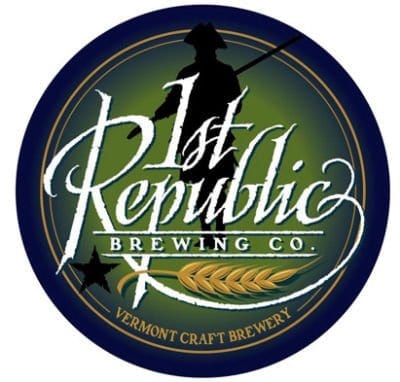 Vermont recently made headlines this week, when magazine Craft Beer and Brewing wrote an article entitled “Beercation: The New Burlington Beer Scene.” The in-depth article takes a look at the Vermont craft beer scene and the inspired brewers that make it all happen. Did you know that Vermont has the second most breweries per-capita in the country? Burlington, which is Vermont’s biggest city, has the most craft breweries in the state, but if you travel outside of BTV, you’ll definitely find a many other fantastic breweries, including 1st Republic Brewing Company based out of Fairfax, Vermont.

We are very excited to offer 1st Republic Brewing Co. and are looking forward to sharing their amazing brews with our customers. 1st Republic’s owners and brewers Kevin Jarvis and Shawn Trout, who are two friends and military veterans, began crafting beer out of their garage using only a single burner system and “maintains the dream and perseverance to grow while staying true to their hometown values. 1st Republic Brewing Co., as accomplished Vermonters, creates unique brews, while enjoying the fruits of their labor.” They give respect and honor to their Vermont roots and want to represent the “heart and soul of the hardworking people of this great state.”

At the moment, 1st Republic’s facility is only for brewing beer, which means that no tasting room is available. They do hope to debut one sometime this year and encourage their fans to follow them on Facebook, to receive updates and information on their brewery. Regardless of a tasting room, you can still try 1st Republic’s brews at a number of bars and restaurants around the state including: Cody’s Irish Pub and Grill, Pleasant Valley Brewing, Vermont Tap House, Monkey House, Brown Dog Bistro, Worthy Kitchen, Farmhouse Tap & Grill and Bluebird Barbecue, just to name a few!

Now that you know where you can find their delicious beer, let’s explore a few of 1st Republic’s stellar brews. Here you can find information on three of their current draughts offered:

We hope you get the opportunity to try 1st Republic’s brews. If you do happen to indulge in their tasty beverages, share your thoughts with us on Facebook!